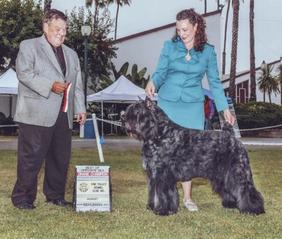 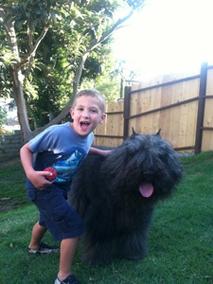 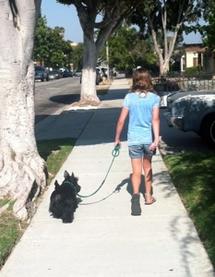 At the end of June, we were elated to get the final word that Garrison was indeed qualified for the Top 20 competition at this year’s National Specialty.  Although our fall plans are not conducive for us to go and actually compete, it is an honor to qualify and we will be getting our big rosette capturing this accomplishment.

We did take some time off to relax and allowed the dogs some time to “just be dogs” for a few extra weeks at a time than when campaigning showing regularly.

This “down time” allowed us to enjoy time with our two-legged family members from Texas. As a family, we visited Disneyland and Disney California Adventure and had the Texas Kuhn kids over to spend several days visiting with us and the dogs.  As you can clearly see, the kids enjoyed the dogs and vice versa!


(Sadie and Gypsy our older Scottie enjoyed walks around the neighborhood together.)

(Marc and Garrison loved playing ball in our back yard.)

Our client’s John and Diane Thomas had a small celebration at the show grounds and a slightly larger one at their home on Friday, July 6th when Rod and “Captain” the Scottie added the title of Champion in front of his name by going Winners Dog and won his 4th major!  We moved him up to Best of Breed and then Captain won 2 majors toward his Grand Championship that same weekend by going Select Dog.  Captain is now CH. Charthill Sea Quest.

Our clients Jim and Nedra Matteucci have been smiling from ear to ear as their Bouvier boy “Rowsby” picked up a total of 8 points with one 4 point major toward his Championship over two weekends at Long Beach and the Ventura Summerfest weekend shows.  Rowsby Woof du Matin (bred and co-owned by Jody Head) is already over half way to his Championship in just 6 shows!

As August rolled around, we were unsure if Danica would finish her Grand Chamionship before we bred her.  She came in season a week before we had targeted on our calendars, but quickly learned that two of her littermate sisters came in season on the exact same day in other locations in southern California.  It was obviously “their time”, but it was the day after the show entries closed for Santa Barbara.  We had entered Danica only two of those four show days because we had assumed she might be ready for breeding.  Little did we know that would actually be the case based on progesterone tests and when Danica came in season in spite of our own planning.

Forunately, judge Mr. Del Richards found favor in our girl and gave her Best Opposite Sex on Friday, August 24th and those last two points Danica won completed her requirements for becoming a new Grand Champion!


Garrison’s howling from the driveway that morning as we pulled away from the house toward the show grounds confirmed what we suspected.  The results from a progesterone test done on our way home from the show proved it was time, according to Mother Nature, to breed Danica. So we did. And the waiting game began.

The theory that girls will sync their cycles isn’t really a theory, especially at our place.  Lara came in season shortly after Danica, and it was her time to be bred, too.

If all goes well, we will end up with two beautiful and healthy litters of puppies for La Chanson Bouviers and Bravo Scotties this fall.  With that said, we will not be attending many shows for the rest of 2012.

However, Pilar will be up in Pleasanton, CA judging Sweeptstakes for the San Francisco Bay Scottish Terrier Club specialty on October 20th and you might see her with a dog or two in the rings before the shows wrap up for the end of the year.  Someone will have to stay home with puppies, and most likely that will be Rod, since Garrison only needs around 30 points for his Silver Grand Championship, Captain is working toward his Grand Championship and Rowsby is working toward his Championship.

We’re incredibly grateful for this past year’s successes and hope that this fall brings more good tidings.

Away from the dog world, Pilar will be singing once again this holiday season with the Angel City Chorale - their concerts are December 1-2 in the evening and the program offers a wide variety of holiday music.

Stay tuned for more news as the months progress. If you can’t tell, we’re hoping and praying for good news about puppies galore! 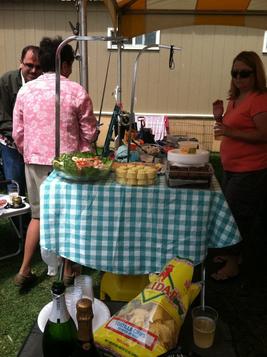