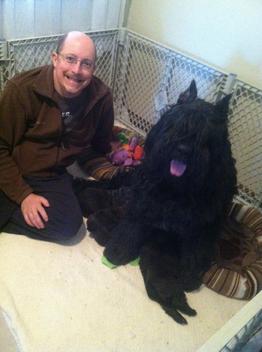 Eight weeks ago on February 20, 2014, our lovely girl Danica brought 3 healthy boy puppies into the world.  After all we’d been through trying to get a litter out of her, we declared this our “Miracle Litter”. Never a dull moment around our house, Danica’s pregnancy kept us on our toes from the first time she was successfully bred to Garrison to her first day in the whelping box.

We chose to have an ultrasound done when she was 4 1/2 weeks along to determine if she was pregnant or not. Sharon Kerbo did the ultrasound and found 4 little embryos. At the time, she said they all looked healthy and normal, pinpointed February 19th or 20th as her due dates based on the size of the whelps, but also offered a follow-up ultrasound to make sure all was advancing well given Danica’s complications in the past.  At the follow-up, three of us felt Danica’s sides and guessed there might be 5 or 6 puppies. The ultrasound revealed 3 puppies. We couldn’t find the 4th, but I witnessed a puppy stretch in utero and that image will stick with me the rest of my life. We had puppies brewing!

A week before her due dates, our regular vet Dr. Fuchino felt Danica prior to her x-ray. He guessed 5 or 6, but the x-ray revealed 3 puppies.  Wondering how Danica could have so many of us fooled into thinking she had more, we measured the heads. All 3 puppies were backwards and their heads measured 3cm. I knew then we would have to have a c-section when it was time for these babies to meet the world. They would be big puppies. We monitored Danica closely, began taking her temperature four times a day  on her first due date, and the morning of the 20th on her second temperature taking, her temp had dropped. This was in addition to her restlessness, hole digging under bushes, and light panting. We knew the puppies would be on their way within the next 12-24 hours, so we called Dr. Fuchino and off we went.

As Rod and I stood in the operating room, Rod asked if I was OK. I answered, “Oh yes.  I just worry about our girl and I’m really excited to meet these puppies. I want everything to go well.”

The staff asked if we were OK with them watching the operation from outside the room. They don’t get to see many c-sections and they have all invested time and effort into our attempts to get a litter out of Danica. Of course we said it was OK. It was an honor to have this opportunity to share with them why their jobs are important to us.  Dr. Fuchino and his team had Danica prepped and ready to go. The puppies were bigger than he anticipated and had to make a larger incision. As he began pulling puppies out, we could see them moving. We knew we had live puppies. The first puppy born was backwards. A brindle boy, the vet tech handed him to me to rub him while he suctioned his mouth. We got a little cry out of the little guy and I teared up. No time to waste, we had our second puppy to tend to. He had turned in the last week, but the third puppy had not. As Dr. Fuchino continued to investigate Danica’s uterus, he found the fourth puppy.  Sharon Kerbo had been correct at the first ultrasound and the second ultrasound. This 4th puppy had been decomposing for weeks. We were more than fortunate that this one used-to-be-puppy did not make the others sick nor cause them to die.

As Dr. Fuchino tended to Danica, we tended to our newborn puppies.  Danica woke up gradually and we weighed the little guys. Two of the boys weighed 1 lb 10 oz and the third boy weighed 1 lb 5 oz. These were indeed big boys. We had made the right decision regarding the c-section to make sure they all made it out alive.

Eight weeks later, we are still amazed at the three wonders.  Danica has been the most amazing mother. When they started enjoying the great outdoors, she watched over them with a smile on her face and would then engage them in a “watch how to play chase” game. The boys weren’t sure what their mother was up to, but they were intrigued and she loved it. She was still letting the boys, at 7 weeks of age, have a “security nip”. They would stand with their baby faces turned into her belly searching for any remaining drops of milk. At night, she will go outside with the rest of our pack, but insists on bidding everyone “goodnight” and asks to return to the kitchen where she sleeps next to the play pen and her boys.


After all the trials and tribulations getting this litter on the ground, Danica’s mothering skills more than made up for all of it.  We look forward to breeding her again to a different stud dog. We have a busy late summer and early fall, so most likely we will wait for her winter season to breed her again for a litter late 2014 or early 2015. 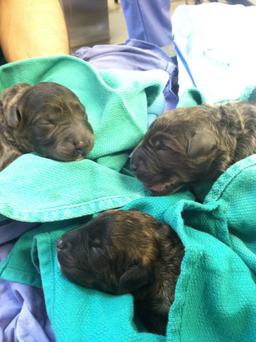