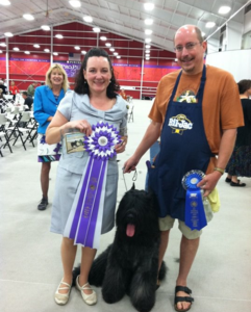 Our dogs had a great time at the Purina Events Center in Gray Summit, MO October 3-7.  I attended a grooming seminar on Monday that Tony DiGiorno (Susant Bouviers) and Doug Johnson (Rocheuses Bouviers) gave and appreciated hearing what they had to say about grooming.  Overall, I have been doing a decent job on our dogs, but one can always learn ways to groom.

My philosophy is you take information in and keep what works for you and let go what doesn’t.  There is no one way to groom a dog and every dog is different.

Wednesday was Sweepstakes. Danica showed really well in her huge class. She was initially pulled out front, but the 14 or 15 girls in the class took a lot of time and she started to get antsy.  Her sister Vivi ended up going 3rd in her class so family represented well!

Thursday were the regular classes.  Vivi didn’t do as well as we had hoped for her, so we were a little nervous going into the Open Bitch class.  However, Dani not only kept it all together, but she was enjoying herself tremendously. Her head and tail were up and she was ON.  She won her class of 7 and had to turn right around to go back in for Winners Bitch.  There were many wonderful bitches in the ring for Winners and when judge Judith Goodin pointed at our friend Elaine Jeche who won her huge Bred By Exhibitor class (14 entries!) for Winners Bitch, I screamed out a loud “WHOO HOOO!!!” and got teary eyed. Then I remembered I still had to show the Danikinz!  The 2nd place winner from BBE came in and we were sent around the ring again. Danica still kept herself together and the judge came over and pointed at us for Reserve Winners Bitch. I think my smile spread across the entire state of Missouri!  Danica hopped and danced over to the placard to receive her huge purple and white rosette and Rod was there to greet us, as were so many people.  Judy Kasper, one of my mentors for breeding, grooming and handling, was in tears of joy for me and Elaine.  She took a picture of us with her big lens camera, but I also had someone take a picture with Rod’s phone so we could post on Facebook.

Elaine’s bitch Indy finished her championship in grand style that day and we are SO proud of her!

The next day was Best of Breed. 71 total specials entered and they took up the entire ring!  Garrison and I were in the 2nd group to go.  He was happy and up (as usual) and I was happy when Judith Goodin came over and asked for our arm band number. We had made the first cut! WHEW! That was my goal for this year’s specialty... just make the first cut.

We had a little down time, so I took Danica out to go play in the huge fenced exercise ring. I also worked out some of my nerves by playing with her.

Then we were back in the ring with all the boys that made the first cut.  Time for another cut to whittle down the choices.  Oh happy day, Garrison made the cut again!  We had time to wait until all the bitch specials were finished.

It was time to go back in for the last time.  10 dogs and 10 bitches plus the Veteran Dog, Veteran Bitch, Winners Dog and Winners Bitch.  A very fine display of Bouviers, indeed!  We were sent around in groups of 2.  Garrison was really feeling happy and had his moments of wanting to gallop. He has always done that when people are clapping around the ring.  He was a happy boy and looked great, but we did not make it down to the last 5 dogs.

At that time, Rod apparently said, “Well, it’s gonna have to be Casper and Anya now since it can’t be Garrison and Madison going Breed and Best Opposite!”

And what insight he had!

It was an amazing day and a great experience and we loved watching GCH Rocheuses Me and My Shadow of Cornus “Casper” go Best of Breed and his sister GCH Rocheuses Pretty In Pink “Anya” go Best Opposite Sex.  First time in our National history that two littermates won BOB and BOS.  We are SO thrilled for the Johnsons and the owners of those amazing dogs.

We drove away toward Montgomery County for the Scottish Terrier National Specialty with smiles on our faces that our Bouviers did so well this year.  Next year the specialty is in Sandusky, Ohio and we’ll decide as we get closer as to whether we will attend.  We never know what our lives will bring forth!