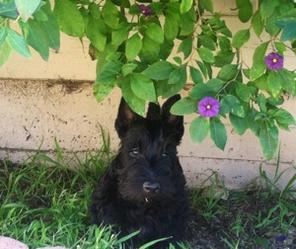 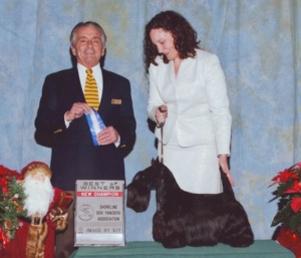 Our anticipated busy fall at home turned out to change, as things usually do when dealing with dogs.  We had Lara the Scottie’s “date” at our house named “Obi” - Ayrzol Obi Wan Kenobi. We had originally planned for a very short “business trip”, but he ended up staying 3 months and earned his U.S. Championship before flying back to Sweden in early December.  Rod and I both put points and majors on Obi for his third Championship. Obi is now a Swedish, Danish and American Champion.

Our fall disappointment came when Danica the Bouvier went in for an x-ray the week before we expected puppies. All signs had pointed to her being pregnant. Our vet went over her before the x-ray and thought maybe she had a few puppies inside. The x-ray, however, revealed that not a single puppy was inside.  Once Rod and I got past our disappointment and shed a couple tears, we had to shift gears over to Lara because she was expected to whelp in two weeks, and she did just that two weeks to the day from Danica’s x-ray.  On November 6, 2012 Rod and I welcomed two new little Scottie girls via c-section.  We have kept one puppy we are calling “Chicory” - Bravo Chicory Au Lait - and the other girl puppy “Bijou” has gone to a show home. It was not an easy decision on which puppy to keep! Obi and Lara did a good job producing two fine puppies.


But back to the Bouviers.  Danica recently underwent an antibiotic treatment for bacterial infections in her reproductive system which caused her to absorb her last litter.  Hopefully it has cleared her up for this next breeding attempt to produce puppies. We are hopeful to announce a litter expected in early April 2013. In all ways of being collaborative, we have another bitch coming to our house to be bred and we will whelp those puppies, too.  We will post more information about that anticipated litter when we have it.

Until then, may the first quarter of 2013 treat you and yours well. 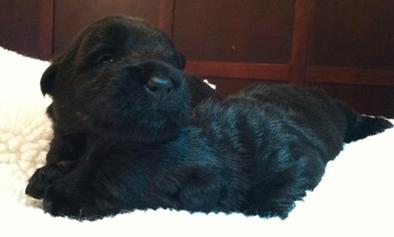