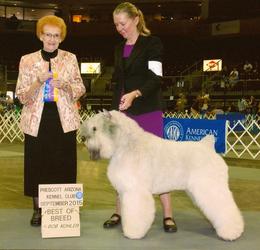 A collaboration between Terra Bouviers and La Chanson Bouviers, Terry Burian-Creel offered us the chance to co-breed this litter after all our troubles with Danica. Cleo produced 10 lovely babies and one of her shining stars is a fawn girl called Coco - Terra's Coco Channel. ​Coco won her regular class at the National Specialty and was one of four bitches considered for Winners Bitch and Reserve Winners Bitch under judge Pat Hastings.  Coco won her first major in November 2014 under judge Donna Buxton, her second major in March 2015 under judge Pat Hastings and her third major to finish her championship in April 2015 under judge Paula Hartinger.