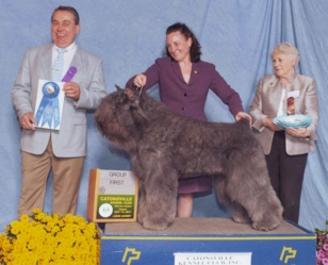 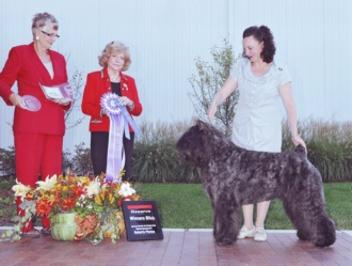 In our new mini-van and a month long of events/shows scheduled, we didn’t know how things would turn out, but one thing I knew for certain - Rod and I would spend our first anniversary at Montgomery County Kennel Club’s “Terrier Mecca” show as I had promised last year when we got married ON the day of Montgomery County.

Starting off the month’s dog events, we parked ourselves at Purina Farms in Grey Summit, MO for a week for the Bouvier National.  It was a week long of non-stop events and we walked away with huge smiles on our faces.

Danica won the Open Bitch class and went Reserve Winners Bitch - so basically she was 2nd out of 57 entered class bitches - and Garrison made it into the final cut for dogs and bitches - a total of 71 specials entered... 42 dog specials... and he was 1 of the last 10 in the ring.  We considered every round we were included in the next cut a huge success... and it truly was a success. We go up against the majority of those in the last group of dogs and bitches all the time and it isn’t just a figment of our imagination that Garrison is one of the top 20 Bouviers in the country in the very difficult west coast circuit - he still stood out among the amazing dogs from all across our country and Canada!

As soon as we watched Heather Johnson and her gorgeous boy Casper go Best in Specialty Show and his littermate Anya go Best Opposite, we packed up our van and hit the road toward Pennsylvania.  Bouviers were done. On to the Scotties.

I will be writing more extensively about my first-time Montgomery County experience later and in a different publication, but for me and Rod, it’s like a family reunion.  I loved seeing the grounds my husband had told me about for so many years ever since we met... and witnessing what he gave up last year to ask me to be his wife.

We got to see our dear and precious Bouvier breeder friend Jeannette who co-owns our Scottie Renoir and it was fun to “just be”... sorta... since Rod wanted me to help get Lara ready for the ring for her very first time as a Special at Montgomery.

Lara showed so well. She looked so beautiful. And she made the cut.  The final group of Scotties were called into the ring and the group of girls she was asked to spar with (and thank goodness judge Darle Heck sparred our Scotties!) um.... well... uh... those girls didn’t spar. Lara spars beautifully when she’s given the right situation... but this day wasn’t her day.  She made us proud regardless and lived up to her nickname “The Bee” by creating a nice buzz about her at our Scottie national.

Short lived visits that left us longing for more... we loaded up once again from our very lovely and comfy room at the Double Tree in Pennsylvania and ventured down toward Baltimore.

Our few days off allowed for some ball play for the Bouvs and some rest days for all, and then we discovered what west coast shows have above other locations - on-site bathing.  Yup. We’re spoiled.  Bouviers can’t go a week in between shows without being bathed and kitty litter pan baths for Bouvs isn’t that easy, but I would have resorted to that if I had to. Thankfully our friend Judy Makem from CA happened to stay out on the east coast to see family and show her Scotties AND she had a hose and spray nozzle!  I was also thankful that the fairgrounds kept running water at this time of year so I could bathe the Bouviers in the cattle wash.

Three days of showing and not in our back yard, Garrison strutted his stuff and added to our big ribbon collection! He won breed all 3 days and won the herding group under Australian judge Chris Moore. Mr. Moore was our breed judge one day, as well, and gave Danica 1st in her class, Winners Bitch and Best of Winners AND Best Opposite for 2 points.  I asked our friend Rebecca to not do anything to her so the only class dog could try to get the crossover points... but it didn’t happen.  Danica picked up another point with Rod at the end of the leash for a total of 3 that weekend. She’s 3 points away from getting her Championship!

Oh... and Danica also came in season the day before this cluster started. So NOT in our plans!!!!  We knew that this would cause major issues during our trip home so we had some problem solving issues to deal with. We did. Judy Makem continued to be our angel. I bought Danica a new travel crate that fits nicely in the van that sat in place of where we had extra grooming equipment that Judy hauled back with her. And we don’t have any puppies due any time soon.  :-)

Our next stop was a brief stop-over at my in-law’s farm in northwest Illinois and what a delightful time that was.  I am so thankful for the people my in-laws are because I was able to see so quickly why my wonderful husband is the way he is.  My mother-in-law successfully raised 7 boys and my father-in-law worked so very hard. All day. Every day.  And it meant the world to them to have us there.  It was a lovely visit.

The last stop before our final “schlep across America” was Springfield, IL at the 4 day cluster.

Danica was getting “riper” by the day, Garrison was getting squirrelier by the day and there were no points in class bitches so we pulled Danica after the first day. Garrison managed to make the cut every day in the group and on Day 4 he got a lovely Group 3.  Lara won Best of Breed the first day, Best Opposite the second day and Select Bitch the third and fourth day. The Bee earned her Grand Championship which was yet another goal of ours during our road trip.

We got to visit much more with some of our closest friends and after Garrison won his Group 3, the car was loaded and it was time to push on through toward home. The last few days of driving suddenly turned into, what felt like, the longest... drive...... ever.

What an incredible month. Such fantastic memories. Our first wedding anniversary shared with “family”.  And, naturally, our dogs were the reason we put almost 7,000 miles on our new mini-van.

It’s taking a little time to get used to not being on the road. When I sleep, the non-hotel noises wake me up - namely, the lack of a window A/C unit running.  And I still start to wake up trying to remember where I am, only to realize I’m in my very own comfy bed.

What A  Month On The Road