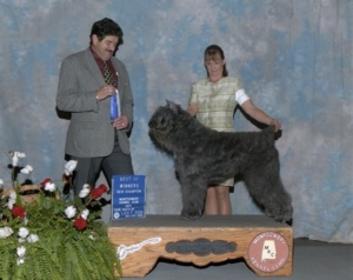 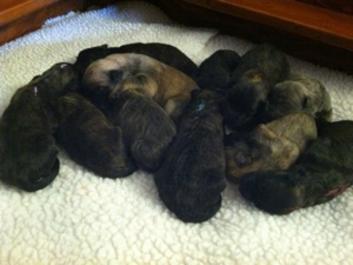 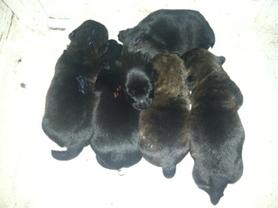 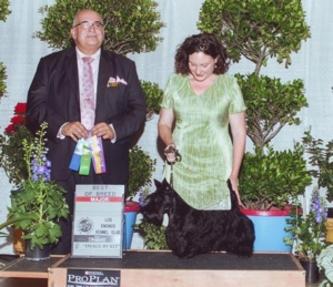 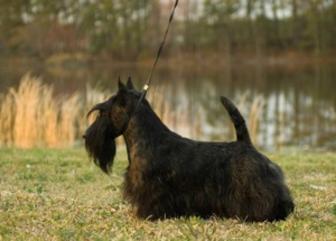 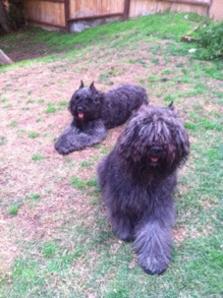 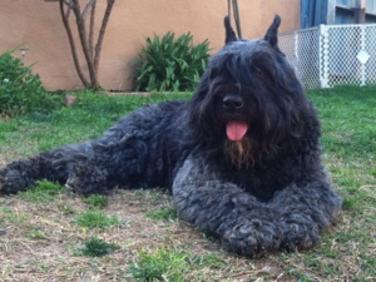 Last fall when our litter of Obi x Lara Scottie puppies were born, Rod and I embarked on our home buying journey.  This spring, we were able to close on a lovely property with acreage providing more room for us, the Scotties and the Bouviers.  Our new home, now nicknamed The “Ottcienda”, is close enough for me to get into L.A. for work, but far enough away from the hub-bub of city living to allow us more privacy from neighbors and room to comfortably maintain the two breeding programs as we desire.  And we moved just in time!

Last fall when Danica the Bouvier absorbed her litter, we called our colleagues the Johnsons of Rocheuses Bouviers to continue conversations with them about leasing a bitch.  Knowing our challenges with Danica and the goals of our breeding program, they offered us the opportunity to lease a bitch of theirs named Passion - CH Rocheuses Pink Passion - to breed to Garrison this spring.

Passion is the littermate sister to Casper and Anya - GCH Rocheuses Me and My Shadow of Cornus and GCH Rocheuses Pretty In Pink.  Casper won Best of Breed at the ABdFC National Specialty as well as the Top 20 competition in 2011 and Anya won Best Opposite Sex at the same specialty.  Rod and I were excited about this future breeding for both kennels.  In early March, I drove to Scottsdale, Arizona to meet up with the Johnsons and transport Passion home to Casa Fairview.  Although she was due to come in season any time, she had to adjust to the other bitches in our household.  She held off for a while, which gave us time to deal with Danica’s latest breeding.


It was not an easy spring for us regarding Danica and her January breeding.  In fact, I wrote an article about our situation that was published in The Canine Chronicle.  Feel free to read the article titled, “Small Bugs, Huge Problems”  to find out more about our ordeal.  March was a trying month for us, but April was much better.

Lara the Scottie came in season in early April and she brought Passion in season a week later.  So in late April when we were in the middle of our buying process, I flew to South Carolina with Lara to breed her to “Digger” - GCH Charthill’s Premier Performance.


Digger had recently won the Dayton Scottish Terrier Club’s specialty and the following week he won the Scottish Terrier Club of America’s national rotating specialty held in Atlanta this year.  Rod was there to watch this amazing win because he judged 38 Scotties in the national Sweepstakes earlier that day.  I did not travel with him because when we made his travel plans, we had hoped to be welcoming a little of puppies from Danica the Bouvier. And a week after Digger bred Lara, Garrison bred Passion.

As we waited for puppies to brew in both girls, we had our Obi x Lara Scottie puppy “Chicory” - Bravo Chicory Au Lait - to groom and prepare for our STCC’s 80th regional specialty the weekend of Great Western Terrier Association in Long Beach at the end of June.  We decided to get Chicory used to real dog shows and entered her on the Friday of the Mission Circuit of Memorial Day weekend - the weekend we would be moving into our new house - and with a realistic expectation of Chicory showing like a puppy and perhaps playing in the Best Puppy competition held that day, she surprised us all by not only winning Winners Bitch for her first point, the judge Kerry Lee from Australia found extreme favor in our girl and awarded her Best of Breed from the 6-9 month class over 3 specials.  This win gave Chicory a 3 point major toward her championship and she was the talk of the town for the rest of the weekend, even though she wasn’t even present.

One month later and the weekend her mother Lara was due with her next litter, Chicory won her 6-9 month class at our 80th specialty and both days of Great Western. She also won her Sweepstakes class on Saturday under respected long-time Scottie breeder-judge Ron McConnell of Barbary Scottish Terriers.  We were proud of our little girl.

During the afternoon on Saturday, June 22nd, Rod called me to discuss Lara’s continual panting.  We knew she could have her puppies any time.  And on June 23rd, Lara had 7 puppies via emergency c-section during the middle of the night and, unfortunately yet fortunately, we have 5 thriving Scottie puppies - 4 boys and 1 girl.

One week later on June 30th, Passion the Bouvier naturally whelped 11 puppies - 7 boys and 4 girls - and all are thriving.  We had expected 10 puppies from the x-ray, but she surprised us by popping out an 11th puppy after we’d already changed her bedding and settled everyone in for a post-birth nursing session.

In the midst of the two new litters, Miss Danica the Bouvier was right on schedule with her seasons and we bred her to a dog named “Hudson” - CH Airdrie’s Hudson of Avery.

We are nervously awaiting confirmation that she is pregnant and praying that she successfully carries puppies to term.

As you can tell, we’ve been busy at The “Ottcienda”, but we are thrilled with our new home and our new puppies. We’ll post more pictures as the puppies continue to grow up! 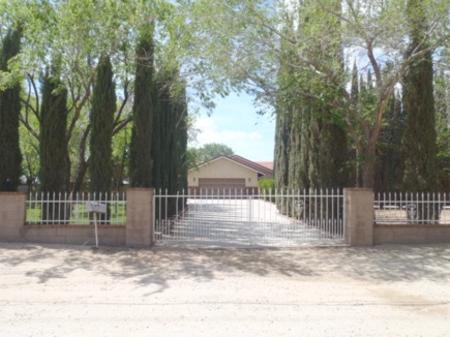