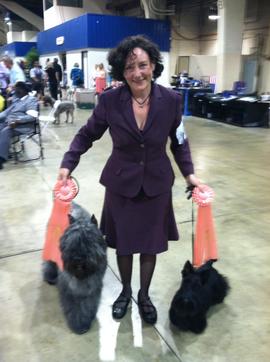 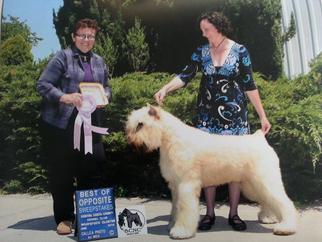 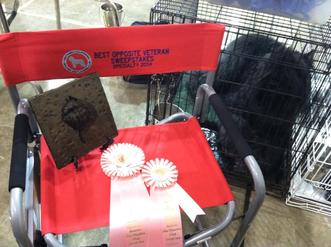 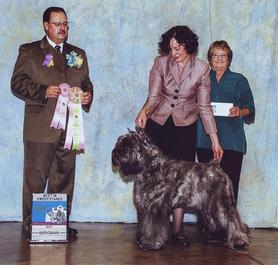 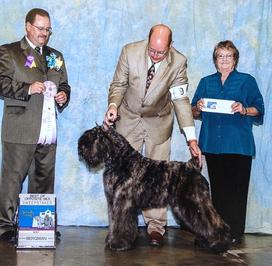 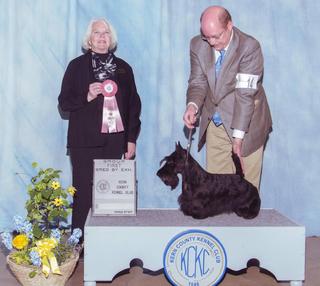 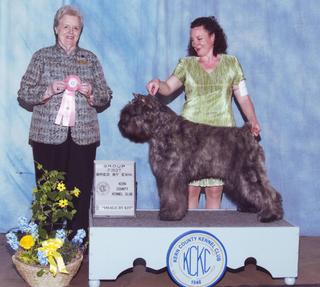 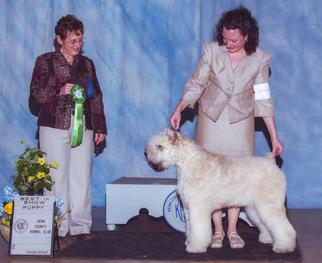 The spring of 2014 made us proud of our young offspring.  At the end of March at the Bakersfield Kennel Club dog shows in the regular classes, Mal - La Chanson's Moonraker - picked up his first point toward his championship and Misty - La Chanson's Mystify Me - picked up two points toward her championship. However, it was the non-regular awards that made us extremely proud.

The first day, Nita - La Chanson's Martini Madness - was awarded "Best Puppy" and then went on to not only win the Puppy Herding Group under judge Rita Biddle, but she was also awarded Best Puppy In Show. Driving home that day, Rod and I smiled from ear to ear. But then the next day, Misty was awarded "Best Bred By Exhibitor" and went on to win the Bred By Herding group. That same day, Chicory the Scottie also was awarded "Best Bred By Exhibitor" and she also went on to win the Bred By Terrier group.  Garrison was back in the ring as a special to get back in the groove for the upcoming specialty where he would compete as a veteran and won back to back Best of Breeds.

And then we had our Specialty weekend.

Breeder judge Hal Wilmot found favor in all our pups and we were so thankful. He ultimately determined that Misty was Best in Sweeps and littermate brother Olie - La Chanson's Mariachi at Terra - was Best Opposite in Sweeps. Their father Garrison was Best Opposite Veteran in Veteran Sweeps, as well.

(Garrison - Best Opposite Veteran In Sweepstakes)

And then it was time for the regular classes . We never expected to have our dogs appreciated so much by judge Mrs. Joan Luna Liebes, but she awarded our young pups well.  Olie was Winners Dog, Best of Winners, and Best Puppy and Nita was Winners Bitch and Best Opposite Puppy. Their father was Best Veteran and Best Stud Dog.  When we entered the ring for Stud Dog and looked to see that we had Winners Dog and Winners Bitch as his get, I confess that I got teary eyed. At the end of the day, we contacted the Johnsons to let them know how the littermates did and thanked them, again, for the opportunity of a lifetime when they leased us their mother Passion.

A few weeks later at the Northern California Bouvier des Flandres specialty, Garrison went Best Veteran in Sweeps and Best Veteran Dog. All of our pups were in the ribbons and Mal - La Chanson's Moonraker - was Best Opposite in Sweeps one of the days.

(Mal - Best Opposite In Sweepstakes)

After an amazing spring came a terrible accident that changed our lives forever. Four days after returning from the Northern California Woofstock cluster, Garrison was playing ball in the front yard with Misty and Nita and he suffered a double FCE - Fibro Cartilaginous Embolism - turning him into a paraplegic in an instant. Rather than take away from all of the accolades of the spring, however, we'll share more details in another post about how we spent our summer getting Garrison back on his feet. His sheer determination to never give up has passed on to his offspring and we continue to look forward to his recovery and all of his sons and daughters successes.

A Spring To Remember 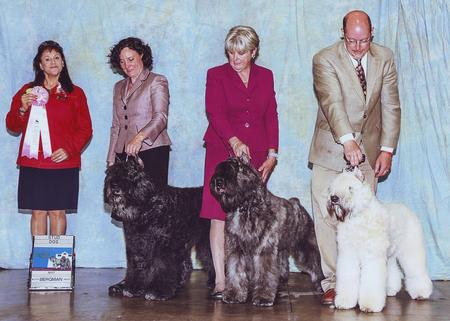